Many have asked for it and now we have it! Glass Aqua has finally partnered up with aquarium LED lighting experts ONF to bring you one of the most talked about and highly coveted nano led aquarium lighting solutions. The Flat Nano  Stand LED light designed and produced by ONF is a beautiful piece of equipment that will illuminate nano-sized aquarium tanks ranging from 3 to 6-gallon volumes perfectly. Constructed from simple materials, ONF's Flat Nano LED features aluminum, plastic, and rubber elements making it extremely light and durable while zinc-plating keeps it sleek and resistant to unsightly rust buildup.

The main difference between this newer stand version and the original ONF Flat Nano LED Light is the sleek exterior matte black finish along with the included stand that can be used as a unique nano aquarium, Wabi-Kusa, OR even terrestrial plant display. Another unique feature of this LED light stand is that it can fit numerous nano aquariums that are larger than the stand base as long as the aquarium tank includes a tank mat like all Ultum Nature Systems Cube and Nano rimless tanks. The ONF Flat Nano LED Light features on/off, 3-level dimming via touch. Flat Nano's light output is the optimal spectrum for aquatic plant growth and suits various species of aquatic plants and their respective light requirements. Once a level is chosen, ONF Flat Nano LED Light has built-in memory and will display the level last chosen even when used with a timer. Coloration is extremely vivid, allowing the myriad of hues produced by aquatic plants, freshwater fish and shrimp to shine bright and clear. Abrupt on and off schedules have the potential to shock skittish fish, but the Flat Nano LED administers ramp up and down capabilities to mimic the rise and setting of the sun to provide the most natural experience for aquarium tank inhabitants.

Specifications are below for one of the brightest, most adjustable, and sleekest nano led aquarium lights in the planted aquarium tank hobby to date.

Most answers to general questions can be found on our FAQ page.
Share this product
You Might Be Interested In
Powered by
4.9 4.9 star rating 14 Reviews, 2 Q&As
Write A Review
Ask A Question
Thank you for posting a review!
We value your input. Share your review so everyone else can enjoy it too.
share
share
share
Thank you for posting a review!
Your review was sent successfully and is now waiting for our staff to publish it.
Thank you for posting a question!
Please click on the link in the confirmation email we just sent you to submit your question.
Your question will appear on the site once someone answers it.
Clear All
Filter Reviews
Clear All
Light Look
Light Look
More Filters
FILTERS Clear All
Rating
Reviews
Show 14 Reviews
Rating
Images & Videos
14 Reviews
Sort: Select
Updating Results
Verified Reviewer
What is a Verified Reviewer
A Verified Reviewer is a shopper who has confirmed an email address, or connected a social network with Yotpo, providing an added level of transparency and trust.
0 star rating
02/17/20
On
share facebook twitter LinkedIn
Was this review helpful? 0 0
02/17/20
T
Tj A.
Verified Buyer
What is a Verified Buyer
A Verified Buyer is a user who has purchased the reviewed product through our store.
5 star rating
Experience Level: Beginner
01/26/20
Experience Level: Beginner
Great light
Having the app makes this light so simple to use. You don’t need to buy a timer and the light gradually turns on and off to mimic sunrise and set. The color rendition is also really nice and makes all the plants look great. Light is well worth the money.
Years In Hobby:
1
Number of tanks:
2 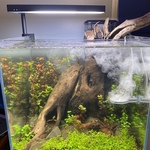 On ONF Flat Nano Stand LED Light
share facebook twitter LinkedIn
Was this review helpful? 1 0
01/26/20
Reviewed on: ONF Flat Nano+ LED Light
C
Christopher C.
Verified Buyer
What is a Verified Buyer
A Verified Buyer is a user who has purchased the reviewed product through our store.
5 star rating
Experience Level: Beginner
01/21/20
Experience Level: Beginner
Sleek and modern design
Absolutely love the look of the matte finish. Very easy to set up, and the fact that you’re able to program a timer/ schedule just makes it even more worth it.
Number of tanks:
3 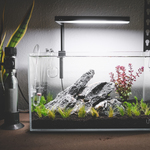 Glass Aqua Team
05/14/19
A: Hello, thanks for your interest! The only ONF Flat Nano LED Light that is bluetooth is the ONF Flat Nano PLUS. Hope this helps!
Was this answer helpful? 0 0
05/14/19
J
Judy
Verified Reviewer
What is a Verified Reviewer
A Verified Reviewer is a shopper who has confirmed an email address, or connected a social network with Yotpo, providing an added level of transparency and trust.
08/04/19
Q: Can the LED bulb be replaced if it burns out or malfunctions? Thanks!
-Judy
Answers (1)

Glass Aqua Team
08/04/19
A: Not LED light bulbs can be replaced without the help of a professional and it’s actually more cost-effective to replace the whole unit itself. But no worries all our light fixtures are covered under a 1-year manufacturer warranty which we back :) don’t hesitate on this high-quality light!
Was this answer helpful? 0 0
08/04/19