Pacific Wood, also known as Horn Wood, is similar in texture and color to the much more common, Malaysian driftwood. However, Pacific Wood features a variety of characteristic knots. Combining a few of these pieces will form an astonishing single centerpiece. Its dark brown coloration provides an extremely natural look to any freshwater aquarium.

The greatest advantage of this particular driftwood is its density, this means that there is no need to presoak or boil as Pacific Wood does not float. TIP: Tannins leeched from wood will provide a natural tint to water, but will gradually dissipate based on the frequency of water changes

Most answers to general questions can be found on our FAQ page.
Share this product
You Might Be Interested In
Powered by
4.9 4.9 star rating 20 Reviews
Write A Review
Ask A Question
Thank you for posting a review!
We value your input. Share your review so everyone else can enjoy it too.
share
share
share
Thank you for posting a review!
Your review was sent successfully and is now waiting for our staff to publish it.
Thank you for posting a question!
Please click on the link in the confirmation email we just sent you to submit your question.
Your question will appear on the site once someone answers it.
Clear All
Filter Reviews
Clear All
Size Shipping Look Tank Wood Shapes
Pieces Variety
Size Shipping Look ...
Tank Wood Shapes
More Filters
FILTERS Clear All
Rating
Reviews
Show 20 Reviews
Rating
Images & Videos
20 Reviews
Sort: Select
Updating Results
Verified Reviewer
What is a Verified Reviewer
A Verified Reviewer is a shopper who has confirmed an email address, or connected a social network with Yotpo, providing an added level of transparency and trust.
0 star rating
06/05/20
On
share facebook twitter LinkedIn
Was this review helpful? 0 0
06/05/20
J
Jonathan H.
Verified Buyer
What is a Verified Buyer
A Verified Buyer is a user who has purchased the reviewed product through our store.
5 star rating
Experience Level: Intermediate
05/17/20
Experience Level: Intermediate
A+ Operation
This order arrived quickly and exactly as I expected. My nano tank looks amazing all because of the great folks at Glass Aqua
Years In Hobby:
1
Number of tanks:
2 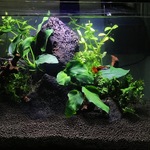 On Pacific Wood Nano
share facebook twitter LinkedIn
Was this review helpful? 0 0
05/17/20
A
Alan T.
Verified Buyer
What is a Verified Buyer
A Verified Buyer is a user who has purchased the reviewed product through our store.
5 star rating
12/16/18
Awesome selection!
I've gotten all of the size selection available for the pacific wood and have not been disappointed once! 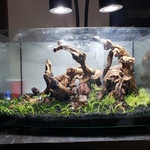 Some of the tones were a little mismatched, but the differences go away once underwater
Years In Hobby:
1
Number of tanks:
1
On Pacific Wood Nano
share facebook twitter LinkedIn
Was this review helpful? 0 0
03/13/20
T
Terry S.
Verified Buyer
What is a Verified Buyer
A Verified Buyer is a user who has purchased the reviewed product through our store.
5 star rating
Experience Level: Advance
02/18/20
Experience Level: Advance
My friends all like my wood
Have not had an aquarium for 20 years or more and the daughter moves out and leaving her betta behind so feeling sorry for him Imprisoned to a coffee cup eyeballs high in his own Urine I decided to make him more comfortable.In hindsight I should have asked questions but having had Fish previous I felt I was qualified but not until after a series of bad decisions trial/error mishaps it was apparent -#1:Bettas cant speak English to communicate pain and -#2: clearly that’s why things got out of hand somewhat, in many ways I failed hm as a friend but what’s done is done.So I bought a nice big 4 gallon tank,
So my idea of filtration worked for me but possibly sizing the canister filter up 5 sizes did not translate to a tank 5 times cleaner or allow the betta a place to relax, he did seem to hangout on the intake tube a lot and I assumed he was just seeing if it was friend or foe Fish do that I read, once he broke free he seemed to eat more and knowing I had filtration for a good 200 Tilapia I thought why-not, so I bumped up his portions, all seemed good, next day or so there formed a very viscous sudsy floating mass of some sort, it rotated clockwise with the current and slowly became gyre-like over time not changing size or shape-eventually it was advised to remove it and after the tank did seem more normal.The betta was nowhere to be found I did find a small swatch of colorful slime and possibly he molted I don’t know.
It’s been a few days and feel he might have become nocturnal so I bumped his portions up again so he wouldn’t starve it’s wrong to be cruel,
It’s been a few weeks now and the tank really looks good, friends take turns trying to find the betta but after 30 minutes or so they only comment how nice the small wood pieces look floating and turning clockwise constantly-I always show them your website some have shown interest and I hope will join the hobby, it feels right to pass on experience and wisdom it’s what makes us human.
Thank you again for the fast shipment